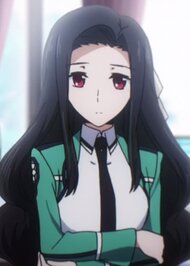 Best one to end up with MC but we all know that it won't happen;

only thing saving this show

She and Erika are the only good characters in the show, and although I prefer the latter, the former is honestly better.

The story does a despicable job of explaining her importance as a character, but the implications do not fail to be there. It took me a bit of analysis time but it is clear to me now that she is a diamond in the rough at its finest.

She is smart, a powerful magician, wise, insightful, cute, cunning, and a joker.  What is not to love?  She gets under Tatsuya's skin more than anyone else but I get the impression in a attraction way.  Only Miyuki seems to have as much or more influence as she does over him or anyone.  She loves to pull little pranks or any good opportunity to have a cheerful laugh albeit not in a cruel way.   Her special skills are matched by only a handful of others.  With her keen insight and long distance focus viewing magic, multiscope, she can sense things few others can which is when she realizes Tatsuya is hiding far more power than he lets on even before it is revealed he is in the military.  She is also the first person, that did not already know who he was, to suspect that he is of the Yotsuba clan.  Her position makes her a Julliet like character in the story because her family is at odds with the Yotsuba.  In the past, her father was supposed to marry Maya Yotsuba, but a tragedy prevented that.  If she works out as his future wife then it would resolve an issue caused by the very tragedy which made the Yotsuba a source of fear and mistrust and fractured the relationship to the Saegusa.  Hopefully it would not end with their deaths however.  The potential classic romantic story angle is one of the subtle cues aboout her character potential that no other character in the story shares.  She is a worthy match in qualities to Tatsuya or Miyuki.  Unlike Miyuki though, she is a much stronger and more appealing character with a greater sense of independence and a powerful yet appealing personality.

She brings a certain depth to the story that it would lack without her.  It is demonstrated by how much the student council tends to struggle after she leaves office compared to how well run it was when she was in office.  She is the only character for which Tatsuya showed any measure of desire toward even if it was somewhat of a misunderstanding the implication is clear.

girls with red eyes are always the most beautiful :3