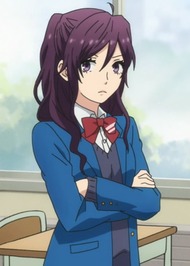 I actually like the anime but her existence makes me wanna drop it. Also, I don't think she loves Anna, she's obsessed, I understand why she became like that but that shouldn't be a reason to why she's so clingy and possessive.

Ik this is fiction but its kinda annoying that shitty characters like her have friends when I don't, despite being less shitty than her lol.

itikisaida she's a person you DON'T want to be friends with, she does too much and won't let Anna be alone or have space.

All of you who are bitter about her must have never had friends like her, eh?

she kinda ruined the anime for me. i get it hashiba isn't the best mc out there but she was just too damn annoying