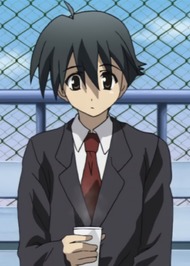 Makoto Itou is nothing more than an average high school student, with all the quirks and foibles of any young man of his age. Captivated by the beauty of Kotonoha Katsura, with whom he rides the train every morning, he develops a crush on her, but his shyness prevents him from making a move until the energetic Sekai Saionji decides to help.

This guy is no more than a bag of dicks, he has no personality and is dumb as balls. How dare you're existing

The girls deserve as much hate as him, they're all idiots

You can say all you want of him as a person, but he is a great character.

In the anime, they literally stripped Makoto of ALL of his likeable, human characteristics. They removed his Bully Hunter nature, any of the little decision-making skills that he had in the visual novel (granted, they were minimal, but they were still there!), and, most egregiously, his little sister, Itaru.

I'm well aware that Itaru was only in one route in the visual novel. However, in said route, she's incredibly adorable. Not only that, but they play her little sister's role completely, 100% straight. For example, there is a scene with her and Makoto in a bathtub, and they don't even show her nipples. This means that her whole purpose in the visual novel is to be Makoto's little sister. And you know what? He's actually a very responsible older brother, cooking for her and allowing her to bring toys in the bathtub. Not only that, but there is a scene where Itaru convinces Makoto to convey some of his relationship baggage to her, and he does it in such a way that she can understand him, and it actually makes him feel better. Perhaps it even allowed him to make a clear-cut decision at the end of the route. In other words, Itaru and Makoto have a mutually beneficial relationship, and she really brings out the absolute best in Makoto. That's why Itaru is definitely my favourite character in School Days.

And, in an attempt to make Makoto as unlikeable as possible, they completely eliminate her! That's right, they get rid of a character who was designed to bring out the best in him just so that they could justify his awful behaviour in the anime! That is horrible.

But, as a person who tries to find the good in many things, especially characters who many people hate, I found it very reassuring that Makoto was much more developed in the original visual novel. He isn't a great character, but he does have many positive attributes and is much more realistic. He's inexperienced in the game of love, and as such, the decisions he makes can be extremely poor. However, when pressured substantially, he can still pick one relationship and focus on it, as opposed to sticking his dick in anything that moves. He is also willing to stand up to bullying, and through Itaru, he is shown to be responsible, good at maintaining the house, and even a little kind, even though the final trait is often obscured by his sex drive.

I honestly prefer him in the Manga, the two OVAs and Good Endings of the VN's to the crappy guy he is in the anime adaptation. At least in the manga he was more likable though could've been written FAR BETTER in a number of areas. Would've preferred his character and personality been more true to the text and the OVA's apart from the anime (which was one hell of a Hot Mess). Albeit Makoto was decent up until Episode 11. While he's dense and did do some messed up stuff, he had remorse for what he did at the end-but could/should have been much stronger of resolve and true to his feelings. He did bring what happened onto himself in the anime, that I won't excuse or deny.