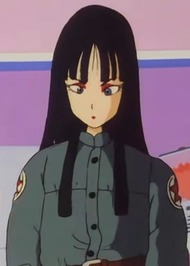 The most epicly underrated waifu in the history of anime. No wait, there are a few even more underrated ones but not many.

Forget about "Future Mai". I don't even know what they were thinking when they created that character. Be aware that that's a different character. She doesn't look or feel anything like the one and true original Mai from DragonBall. So drop the pedo with Trunks bullshit from here, that's not her.

Mai is an S-tier waifu for the following reasons:

1. She has a jawdroppingly pretty face that puts even 18 to shame. The contrast with her uniform helps accentuate her features even more.

2. She is naturally very feminine. She is the only female character consistently shown wearning makeup. Her mannerisms are also very feminine.

3. She is the only female character not sexualized in any way. Her uniform is not revealing to put it mildly. Not that she needs to show her body to be the most beautiful girl in the entire franchise. Her face does it alone.

4. By the way she has a flawless figure, too. We know this from a few scenes where she's not wearing her uniform.

7. Being a comic relief character is a nice disguise for the fact that she's best girl. Mai is all about contrasts.

It's just weird to me. I know she seems like a nice character (atleast until now), but for some reason, I'm just not too comfortable with her as a character in DB Super, child and future self.

However, this might be one of the reasons; Of course, she was pretty annoying in the first Dragon Ball along with her pilaf buddies (I dont care too much about those two, so I'm not gonna bother mentioning there names). When she first showed up in the Battle of Gods movie, I wondered, "What was their purpose in being there in the first place? Like what's the point in them (specifically Mai) being apart of the Super series in the first place? And why are they turned into kids?" Like, what was the reason for that?

I feel like her reason for being in the show was just an excuse for her to be love interest for Trunks. I guess that wouldn't bother me so much, IF SHE WASN'T AN ADULT IN A CHILD'S BODY!

In Battle of Gods (and Super) Mai and the pilaf boys showed up at Bulma's birthday party to try and steal the dragon balls as children. Why are they children? Well, apparently when they had the dragon balls sometime before, they were getting old and wished for youth. You know the saying, "be careful what you wish for", well this was the problem and they turned into babies (around the time where Trunks was a baby.)

Now that Mai has met Trunks, he started to have a crush on her and there are some hints where she started to like him too. The thing is, although she's a kid now, she still has the mind of an adult. She may have changed physically, but not mentally. It's just, the thought of her starting to like a kid that's around 20 years younger than her is cringy. Um.... pedophile much?

I know what some of you are gonna say, "She has Future Trunks, who is way older and almost close to her age." I guess at that point, it doesn't really matter (at least in Future Mai's case) because when your an adult, it doesn't matter what age you are. Still, it's a little unsettling. Does Trunks even know of her backstory or what her age actaully is?

I hate Future Mai from Dragon Ball Super, because she has high emotional complexity of complete levels, with complex attitudes and actions, with high sincerity (or Sincericide), high emotional imbalance, antipathy of high levels, and even though she has certain motivations due her great understanding, lack of intolerance and other things, she also has very strong wrong motivations, and even though she is always willing to throw her life away to protect others, and that makes her antipathy very big because of that, exaggerating too much for certain and further worsening their own motivations and morals on account of sincericide and others. And although her empathy is already very weak and her antipathy is high, she still likes others very much, even though she is not able to pay much attention to others, and she never deals with rejection, loneliness, misfits, etc. And the chances of her being able to perfect her bad side are 60% or 70%, but her major disadvantages of reaching the maximum percentage of this are her high understanding and her lack of intolerance. And even if she is developed, her development is far from being higher than that of others, due to her impairment in the percentage of development that has already been mentioned above, which makes her very far from being a much better character as the others, due to their emotional imbalance, antipathy and others.

And the random paedophile award goes to..... this weirdo. How does it feel to be more obscene than an old man, specifically targetting a young boy?