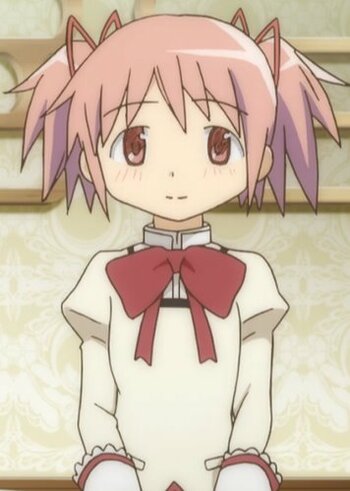 Jesus was a magical girl after all.

I adore this character. I agree with her choice at the end. She spent the whole series and before (in this timeline at least) feeling useless and like she had nothing to offer. So in a way, her sacrifice at the end wasn't even a true sacrifice. As a goddess she finally had a purpose.

Madoka is not my favorite of the main quintet because I find her personality and dialogue banal. I disagree with her ideals and largely side with Kyuubey. Regardless of her flaws, I love her character. Madoka's role in this narrative is crucial, as she does a great job of conveying and complexifying its themes and messages, and I found her development from timeline to timeline as a result of Homura's time travel highly intriguing.

In earlier timelines, Madoka seemed more extroverted and confident, but as Homura continued her travels, she seemingly grew more timid and self-deprecating. I theorize this correlates with her increase in what Kyuubey referred to as karmic destiny; the more important she became to the laws of the universe, the more pressure it created for her. As Homura meddled with the Madokas in each timeline and attempted to protect them from what they did not see as a threat, they developed a belief they were incompetent and incapable of defending themselves or others in comparison to Homura, especially in their dying moments. As implied in the series' dialogue, every timeline is connected, as are the characters within them.

The outcome of one timeline resulted in bad karma, and the Madoka in the following timeline was subject to said karma. This is because Homura's reasons for attempting to rescue Madoka increased in egocentricity and malignance, and so in return, Madoka served as a medium who had to take on all of Homura's karma. For every quantity by which Homura's ideals were tarnished, Madoka was harmed by the same quantity. This was the best way for Homura to hurt the same amount she hurt others. However, the more pain Madoka endured, the more Homura obsessed over her being in peril, and the more reckless and selfish her actions became. It became a cycle which would not break until Madoka wished for what she did. Her wish defined the story.

My speculations are very unscientific, but this is to be expected because I am utilizing and alluding to concepts unique to this series such as karmic destiny, which are also unscientific. By the logic of the franchise, I believe my postulations are sensible. I am open to respectful counterarguments and hearing others' ideas.

Anyhow, I love Madoka. While she may exude the atmosphere of a Mary Sue, one trait of hers I find to be original is how much of her depth is hidden within Homura. This also leads to my reasoning for my favorite character being Homura; one hundred timelines' worth of experiences contributed to her psychology, thus its unrivaled intricacy, and most of what happened to Madoka throughout the plot was her doing. The notion of Madoka's depth being housed within Homura's depths indicates a whole, new layer of complexity on the latter's end.

Regardless of Homura's influence on Madoka, Madoka has free will. This was not very apparent until the end of the television portion of the series, which is one reason people seem to dislike her. However, whether this is a flaw in her character is debatable. I can see both sides of said debate, but I would argue it is not a character flaw. One of the greatest facets of Madoka's character is how mysterious she can be despite seeming achingly average in nature, and I feel this contributes to it. Madoka chooses to accompany Sayaka on witch hunts; Madoka chooses to ask Homura to assist Sayaka; Madoka chooses to continue the battle against Walpurgisnacht against all odds in previous timelines; Madoka chooses to cast her wish at the end; Madoka chooses to save Homura in the film. Her underwhelming and demure presence may obscure viewers' acknowledgement of these instances, but said instances exist.

Now, I shall move onto psychometrics. Madoka is an ISFJ taken to the extreme with an especially prominent usage of Fe. This may be because she behaved as more of an ESFJ in earlier timelines; ESFJs utilize Fe more than ISFJs do. This reflects the notion of her becoming more withdrawn, hesitant, and sensitive throughout these timelines. In terms of the enneagram, she is a 9w1 with a 926 tritype and instinct stack of so/sp. It was quite easy to type her, which indicates her psychology is fairly realistic.

Overall, this is a surprisingly detailed character. There was plenty more I could have explored in this analysis. All in all, Madoka is my second favorite character in the franchise.