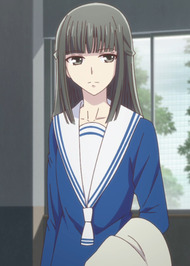 First of all, to the people calling her boring, she is a secondary character, so of course she was not as fleshed out as the main characters! Also, she is very interesting. The whole thing about her being "boring" is a part of her character! SHE WAS NOT ALLOWED TO HAVE OPINIONS OR A PERSONALITY so when the time came for her to step out into real life, she had nothing! She called herself "a void"! That's what makes her interesting. The fact that her whole life, she was forced to fit this certain mold and she spent so long perfecting everything about herself according to her parents' wishes, only to be told that "maybe she was raised wrong", which is very distressing! She was basically told that the version of herself that she is is wrong and shouldn't exist!

Also, SHE DID NOT SINK A SHIP. Yuki saw Tohru as a mother figure, something which, looking back at the 1st & 2nd seasons, you can kind of see! He went to Tohru for comfort but he saw a partner in Machi! All her life, Machi was never allowed to have any opinions and she was never given the opportunity to define who she was according to herself, but Yuki allowed her to do that! He asked for her input and he treated her not like a pet or a weirdo but as a person.

(Also, that scene where Machi sees the perfect chalk and is about to panic but Yuki breaks one without a second thought?? I think about it all the time. Hands down one of the softest moments of the series for me)

Her flashbacks is one of the most tragic story in this series.

I feel sorry for her

I honestly don't get the hate for her. I mean shippers who think that Yuki x Machi broke the Tohru x Yuki and dislike her because of that is just wrong and toxic. For me, she is a great example of a background characters that doesn't need to be one of the main character or a Sohma to get more development. (especially with Saki and Arisa).

People are free to dislike Machi, but she didn't "break ships". Yuki x Tohru was already broken because Yuki has always seen Tohru as a maternal figure, not a person of romantic interest. Why blame that on her?

Look, I love her and I do like Yuki x Machi, but people have the right to dislike her if they want and, no, it doesn't make them toxic. Y'all with your 'cry harder' and your 'gtf out' need to chill.