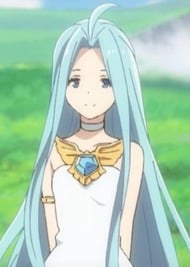 A young girl who has the ability to control primal beasts. She was held captive by the Erste Empire until she was liberated by Catalina, and the two are now on the run trying to avoid recapture. After forming a traveling party with Gran, Lyria's circle of allies has expanded and she continues to learn more about herself and the world around her.