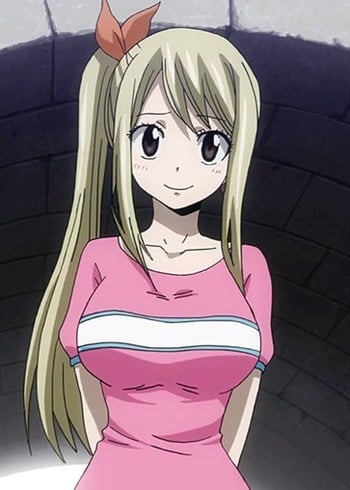 Lucy is a young woman who has only just joined the Fairy Tail guild. As a celestial wizard she summons spirits to her side in battle using keys that she acquires either through purchase or adventuring. Lucy is not always prepared for the dangerous nature of some missions, and prefers to stay out of harm's way unless a considerable amount of money or a rare celestial key is up for grabs. She isn’t as feral or as powerful as Natsu, but she tries her hardest. Though she idolizes Mirajane, Lucy has considerable confidence in her own appearance.

She may be a good character, but I just don't like her for some reason. I wouldn't exactly call her weak as she became pretty powerful towards the end of the series. It's her personality that I hate. She gives off a girly girl vibe that makes her look less powerful that she actually is. And half of the time, she's just crying and muttering nonsense that makes me wanna drag her out of the screen and tell her to pull herself together. That's just my personal thoughts though.

There are things that I like about her too. She's very kind and considerate towards other's feelings, something the other characters lack sometimes. And her celestial spirits are just awesome.

I love her looks, it just screams a babyface character. I've always been attracted to major female characters in shounen series.

Her celestial spirit power is cool too, I think I like taurus the most.

Last positive comments before mine summed up my opinion of Lucy even better than i was able to explain on my own. Always thought she was likable and relatable in the context she's living, and i like her interactions with celestial spirits

Queen of fanservice, indeed. I can´t really say why but I really dont like her. Shes kinda cheap for a character and it feels like they only made her more "important" just so she wouldn´t become the queen of fanservice but she did. I know she is suppose to be strong and independent but I just dont see it so please explain that to me. I just don´t know but the more that I see and talk about her i get more and more annoyed.

Short version: No shes just not for me I guess.