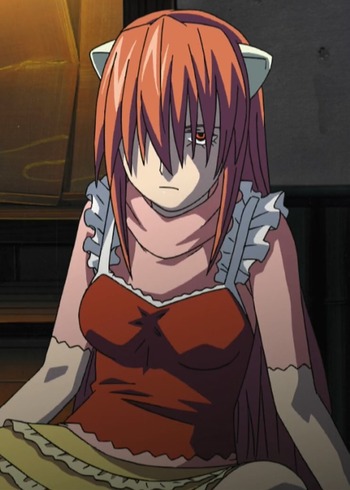 Awful character. Kills innocent people just for the sake of it.

She is, like, the lamest character in the industry. Her character psychology makes absolutely no sense, and she's an obvious excuse for fanservice and forced gore.

For anyone wondering why this character has such a large fan following - it'd be 'cause she's complex. You can't really peg her as a straight up villain 'cause her backstory justifies her position and she has moral standards and redeeming qualities, but her cruel actions and mentality that's callous and even sadistic make it almost impssoble to call her a good person. Sure she's badass and scary and hot and all that, but I doubt she would've been recieved nearly as well if not for her moral greyness. It's a lot more pronounced in the manga than the anime (the latter of which tended to lay it on thick with a "I SUFFER SO MUCH, YOU MUST FEEL SORRY FOR ME" angle.)

Baddest bitch in town, fucking love her guts. She is not afraid of anything but still has a soft romantic side upon Kouta. Kouta is a huge dumbass, Lucy deserved better. Cried at her death though.