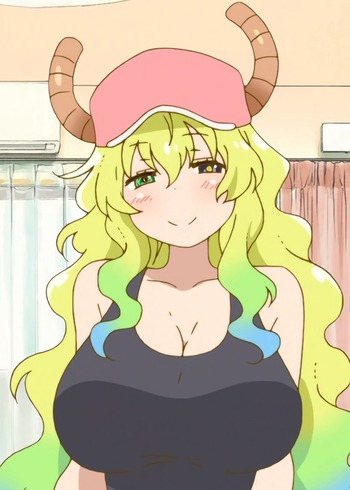 I agree with the previous reviewer, the whole pedo element is creepy asf, tbh the way people brush off the thing with Shota and Lucoa is mad dumb because it would've caused as much outrage as the Kanna twister scene if Lucoa was a male and Shota was a female smh at the double-standards, how ya'll gonna say not to lewd the dragon loli but conveniently dismiss the Shota situation.

To be honest, I would actually like her if she wasn't acting like such a pedophile towards Shota. She tried convincing him to let her live with him because of her boobs. SHOTA IS IN ELEMENTARY SCHOOL.

Haven't seen the anime but, this babe kinda hot ngl.

I really liked her eyes, I think they're pretty ^^