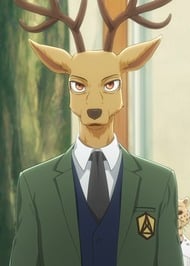 He's cocky, arrogant, but always correct and down to earth perspective, hard worker.

And I usually love arrogant MCs so ofc I love him too!

But he did fuck things up a lil. But there was nothing else he could've done (at least according to me).

I wish there was an arc or anime with him being protag. Like, it'd be a blast! "popular, charming exterior; with hard work, frustration of being who he is being his interior. He slowly falls into darkness by the end if the s01 whole legoshi n haru relationship gets better on. He becomes boss, n goes through hella lengths to bring those lions to do his biding. Damn, if that isn't sexy then what else is??  Oh wait, he himself is!

I've seen this setting a lot in mangas - starts off with mc already deep in darkness (that aspect become his charm), a girl later intrigues mc due to her pureness or competitiveness or something. Now that girl had a fking boss as her man. She heals him,he finds solace in her n they live happy. -- something like this

This is an example of an extremely well-written character

I hate him so much

If Sasuke was a stag