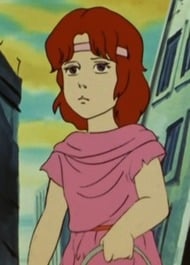 Lin is an orphan whose parents were killed by bandits in front of her. The utter shock caused her to lose her voice. However, Kenshiro cured Lin, and now the two of them, plus Batt, travel together.

Actually, I love this character. She is in some a way the personification of virtue in a world that is reduced to pure vice, and I like the symbolism behind it. Having a girl which reminds to the adults what attitude they should have towards innocence instead of being purely passive towards pure horror is kinda ironic and made me think of a christic figure. The episode 45 is probably the best example of this. It could seem like some cliché character, but - and I was the first impressed of that - it works perfectly where many other animes fail to having characters who incarnate really innocence and virtue without reducing this symbolism to childrens without any courage who cry everytime.

In short, if Kenshiro (and Rei of course) incarnates justice, Lin incarnates definititly the virtue which is precisely the purpose of justice. Without her, I think Hokuto no Ken would be only a generic nekketsu like another but her presence upgrades all the story to another level in term of depth. So yes, a little girl can be badass but in a different way than we generally think when talking of the charism of a character.

Lin > 90 % of humanity in term of spiritual strength towards horror and oppression and that's precisely what makes all her valor.