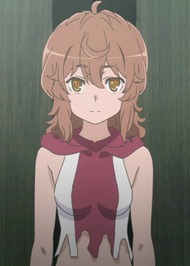 I think this character is interesting precisely because she was an antagonist when she first met Bell. Due to cicrumstances beyond her control, she geniunely had no choice but to do what she did. While it's true she did hate adventurers, she had every reason to and, furthermore, that was not her motivation for what she did. More like a way to make herself feel okay about having to do it. But tricking and betraying adventurers was literally the only way for her to survive. Her familia considered it the only thing she was good for, and would have used her as monster fodder otherwise which they in fact did, the moment they caught her trying to escape). Meanwhile, she was secretly hording enough savings to escape and never have to deal with adventurers again. That is not spite, that is a desire for peace. Lili was faced with two options- be a criminal or die. And she only died trying to create a third option. Additionally, Finn found out that none of the adventurers she betrayed died from the betrayal, a fact which he suggests is because she deliberately tried to ensure that the adventurers would merely be delayed but not killed. Despite all of that, she believed she didn't deserve to be saved and continued to feel extreme guilt for what she did after she joined with Bell.

If there is any issue I have with this character, it's simply that she doesn't seem to have much character development after her initial recruitment. But that seems to be the case with most of the characters, in my opinion. And perhaps that is just because I mostly watch the anime and play Danmemo, so I haven't give the story a fair shake.

There's a lot of hate for this character in the comments, but I don't think people understood her. Imagine if you lost everything and day after day, you were treated like trash. You'd grow up believing you are worthless trash, not worth caring for. So you'd understandly not trust anyone no matter how nice they are and would only care for yourself. Because after all you believe no one else is going to. All liliruca ever wanted was for someone to truly care and just for who she is with no other motive. I'm happy she found bell who truly cares for people for just being who they are. Liliruca is extremely relatable to anyone who has gone through abuse, made to feel worthless and to believe your not worth caring for. In the end all it takes is for someone to truly care. The emotion got me for this character and I'm happy she found bell.

You people know she didn't betray Bell of her own free will right? She was forced to. If she hadn't done it, she probably would have been killed.

Some of these comments really need to chilllllllll