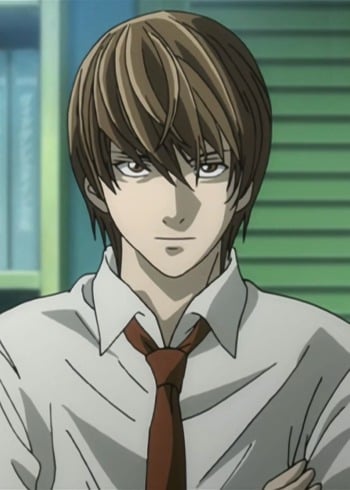 Armed with the power of Ryuk's Death Note, Light Yagami is cold, calculating and self-righteous to the extreme, believing that he alone is able to rid the world of corruption and evil. With precisely-calculated moves, Light strategically manipulates friends and foes alike, no matter who he hurts – or kills – along the way. Above all else, Light's supreme confidence fuels his ongoing obsession with defeating L, his intellectual equal and rival.

Always secretive as to his true identity, Light is known simply as 'Kira' to the rest of the society – including his father, a detective assigned to investigate the ongoing, high profile murders.

Morals are man-made constructs crafted by those of authority and systematically ingrained in human consciousness over the course of generations to maintain order; any concept created by an organism is innately subjective, so Light's imposition of ideals onto others and passage of them as facts are truly ignorant acts. Good and evil are nonexistent. Value is also artificial in an identical regard, meaning the notion some lives matter more or less than others according to their moral compasses is absurd. Laws are written and enforced on the basis of morals and values. Light's nature is reflected by his dismissal and praise of the laws according to his own morals and values.

However, this is precisely what renders him a well-written character. He challenges one's sense of morality, and while his development was a tad choppy and repetitive, his layout was revolutionary for its time. Whether he is morally good or evil cannot be factually determined, but he is certainly more quixotic, arrogant, and illogical than average. His ego outweighs his intelligence, which equates to his humanity surpassing his inhumanity. Any character who can be perceived as a genuine human as intended by the author has been well-executed, and Light fits the bill in a tragic yet empowering fashion.

No matter how much you hate this guy. You have to admit that he's extremly genius. He is smart, handsome and confident enough to challenge the entire japanese police all alone.  Every time L gave a challenge to Light, Light didn't step back, he came up with a new challenge to defeat L. I know he's not a good guy anymore but i still love this character and always will

lol. Light is both in the top loved and top hated characters list.

Mah boi be getting all the glory he deserves.

He wanted worl to become better by killing bad people but got obsessed with power. He did some really bad stuff but still he is too much hated, there are way much worse villains.

I believe he originally had good intentions, but that he became power hungry and got out of control. I hate his cunningness, dishonesty and downright murderous antics, but he's so well written that I can't help but love his character.