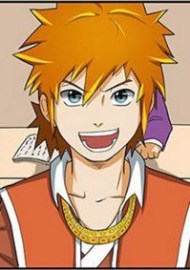 This brat is honestly the worst possible character development I've seen up till now. From easy going, supportive and kind guy to showing off. The guys he actually cares about barely appear in the manga and its almost like every 10 to 20 chapter some random girl gets chrmed by him or he makes an enemy that makes him shine out more. His over powered form is acceptable since he has knowledge from pastlife. But that he talks back to the city's lord son? That is just impudent. He literally tells a prince like guy to not act all high and mighty just because he isn't the lord yet which counts as king. Doesn't he think about how Ziyun feels about her brother? He could've made an enemy out of the brother very easy and what about the love interest then? Somehow it goes away. What I also don't understand is how the elderly pathetically treat him like some god and don't hae a spine all of a sudden. He recently also started ruining the city's lord image by acting rashly against foes. Then was that sasuke guy even a better character development. From powerful to scared and filled with hatred. Then we have the touchy moments in this manga. First he just announces the butterfly mark on Ziyun's chest.

I know, I know they probably did it even in the past life and he didn't think much about it but to just ask it in the open like that is just shitty. The girl was raised in such a close family and in my yes it counts as sexual harassment. If it were on another place then that would be different. Ziyun is such an airhead that she doesn't directly inform her father about this. She didn't know the guy at all, he could've been a stalker but she's like so stupid it spoils the story. The hopeless women around him, protecting him, making guys jealous that were actually their fiancees to let the mc glow up even more is just tacky. Story could've evolved better and I hope I will see that cause I've written this review when I reached chapter 139.

This kid is so annoying.

He started off as a good character. Very bold and enjoyable to follow. However, as he got stronger, he simply became a brazen brat.

Id have to disagree with him being Naruto, Nie Li is cunning by using future knownlegde overthrowing a family who has been secertly waging war against them for what they will do in the future. In terms of powering up his power raises as swiftly as Sung Jin-Woo from Solo Leveling, and the both keep there power relitivly secret until it is tim to show it.

Naruto mixed with Ichigo xD that hair <3 and charming personality