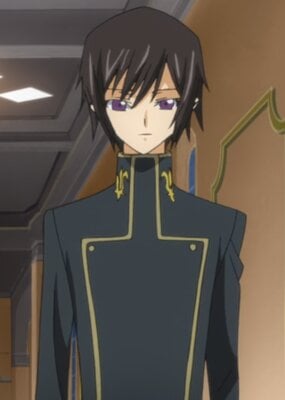 Oh Lelouch. Where do I even begin? Genius, playboy, manipulator, liar, politician, general, warrior, strategist, tactician, chess prodigy, banter adept, philosopher, empath, sociopath, and most importantly, buyer of pizza. Does a character of higher caliber exist? I think not. All hail Lelouch!!

I love him UwU

One of my favorite characters growing up. For sure deserves to be up there on the list

Not a very likeable character imo

Lelouch from Code Geass,oh my god.... It's just like if you wanna see a character that's trying to be Light Yagami from Death Note so bad,look no further than Lelouch.This character sucks,he doesn't even come close to Light Yagami, and I'm not even a Light Yagami fan, I'm not even a Death Note fan, Death Note is trash.But you can tell what they were trying to do, let's make this highly intellectual,one step ahead of everybody,genius,but let's make him even worst than the person that were trying to copy.I mean this character just had sooo many things that he was doing that was unbelievable, his character design is horrible,he looks like a stick finger, he's just tall and lanky for no reason,his design sucks, and they just tried so hard to make you like this character,they tried to hard to make this character looks cool,but there is nothing cool about him.I was clapping at the end of the series where he died,but of course because they want to milk it,they tried to leave it like an open-ended,"do you know if he's dead,do we know if he's dead", it's pathetic.Everything about Code Geass is pathetic.