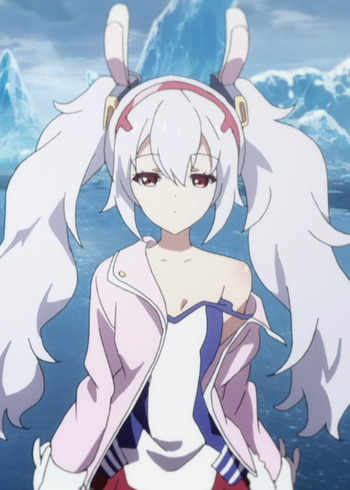 Gave Hiei hell to the end.

USS Laffey (DD-724) is an Allen M. Sumner-class destroyer, which was constructed during World War II, laid down and launched in 1943, and commissioned in February 1944. The ship earned the nickname "The Ship That Would Not Die" for her exploits during the D-Day invasion and the battle of Okinawa when she successfully withstood a determined assault by conventional bombers and the most unrelenting kamikaze air attacks in history. Today, Laffey is a U.S. National Historic Landmark and is preserved as a museum ship at Patriots Point, outside Charleston, South Carolina. Laffey is currently a museum ship at Patriots Point in Mount Pleasant, South Carolina, alongside two other US National Historic Landmarks: the aircraft carrier Yorktown and submarine Clamagore.

Laffey was the second ship of the United States Navy to be named for Bartlett Laffey. Seaman Laffey was awarded the Medal of Honor for his stand against Confederate forces on 5 March 1864.

USS Laffey (DD-459) was a Benson-class destroyer of the United States Navy during World War II. She was the first destroyer named for Bartlett Laffey. Laffey was laid down on 13 January 1941 by Bethlehem Shipbuilding Company, San Francisco, California; launched 30 October 1941; sponsored by Miss Eleanor G. Forgerty, granddaughter of Seaman Laffey; and commissioned on 31 March 1942, Lieutenant Commander William E. Hank in command. She was lost in action on 13 November 1942. She was hit by a 14-inch shell from Hiei. Then, a torpedo in her fantail put Laffey out of action. As the order to abandon ship was passed, a violent explosion ripped the destroyer apart and she sank immediately with heavy loss of life. This action earned her the Presidential Unit Citation. Of the 247 crew members aboard, 59 were killed, including the commanding officer, William E. Hank. The wounded in the engagement numbered 116.

Laffey is the best and if you harm her I will hunt you.