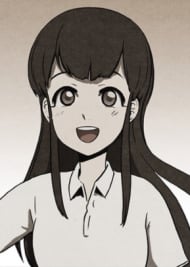 shes so stupid , it irritates me

Anywho, she's dirt poor, takes care of her grandfather (her only family) and she has a truck-load of dept. Looks pretty hrad to handle, especially for a high schooler.

Despite this, she maintains a positive outlook on life while also having a sense of maturity. People have been calling her naive in the comments, which is kinda weird. She's probably the most mature person in the story.

She's not really well-written tbh and i find her really naive overall she's nice and supportive i guess?