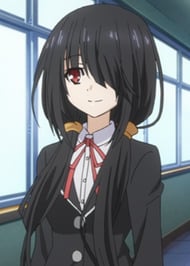 Kurumi is by far and away the best written character in the series, hands down. But I hate when people think to label the success of DAL soley on Kurumi's rep. She's an incredibly character, but DAL wouldn't have been able to survive as a series for 4 (soon to be 5) seasons on the back of a single character that typically only appears for about a 1/3rd of each season.

doesnt live up to the hype lel