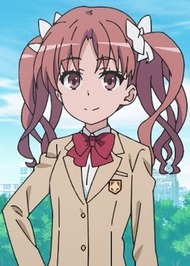 A dedicated member of Judgement, Kuroko struggles to maintain order in Academy City using her powerful teleportation. She is also a jealous room mate to Misaka, and determined to get into her "Onee-sama's" panties!

I liked her... sure she's a pervert and boarderline rapist that goes after Misaka, but she was also very funny and acts serious when she needs to.

Idk why but I really dislike her.

Regarding Kuroko Shirai; the terms pervert; sexual abuse; and similar descriptors are overused, inaccurate and tired. Regardless that the true abuser, Misaka whose routine battering of Kuroko is stupidly, childishly and ridiculously overlooked; Kuroko remains the least developed but most gifted, most intelligent; most capable, mose able, most sophisticated resiliant, resourceful, determined, well- trained and capable character. Yet she maintains a loving heart, a loyal and devoted place in her genuine love toward Misaka. Were this in any way sexual abuse - which is a uneducated chicken way out of displaying posters bias - then Misaka & Kuroko would have been charged and questioned by police a long long time ago. I really need not say more except that todays youths do not think for themselves and parrot what others say for acceptance.  Kuroko is an anime character with more integrity than these posters. Incidently, Kuroko is elegant, sensual, romantic, sensuous and loving. She has never displayed hatred nor harm toward Misaka yet the opposite is more than true. Best friend?? Baloney Kuroko deserves far better and I hope the writers wake up!

I love her, she's so funny