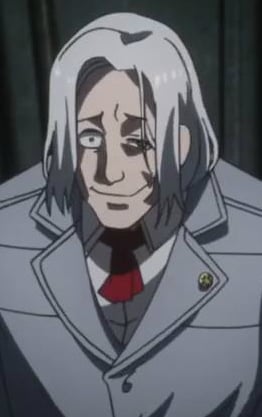 If ghouls didn't LOOK human everyone would think this guy is a hero.

He wanted justice, but just in a bad way.

Love this guy. He's my absolute fav. His wisdom I actually carry and apply to my life. ^^ When he dies, I almost didn't want to continue watching.......I probably cried for days. Just very outstanding man he ish.

i'm not sure if i should like or dislike this character. his attitude towards ghouls is disgusting. he doesn't even consider the fact that ghouls have emotions too, and thinks they are all heartless killers. however, he has good reasoning behind this. he witnessed his wife getting eaten by a ghoul, the one-eyed owl, which is what makes him so hateful towards them. he is very ambitious, and most of it comes from revenge. he wants to kill the one-eyed owl more than anything. he's overall very motivated and passionate in his career, which is why i have some respect towards him. in general, i think that he does have good intentions, and is only trying to protect people from ghouls. the way he thinks of ghouls is very corrupt, but he doesn't know any better. he's only trying to do what he believes is the right thing. if he didn't die so soon, i think he could've grown to realize that ghouls aren't the evil killers that he thinks they are.