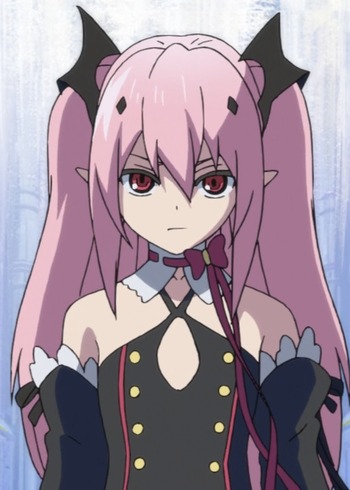 Krul Tepes is my favorite girl in this anime... even though she has very few scenes. 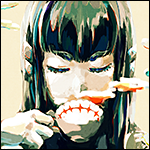 I didn't know Mina was in this show!

She may not be a central character of the show but her appeal far outshines pretty much every other character.  The cute little dance she does at the credits just draw the eyes like hypnosis.  It is such unique dance that highlights her cuteness.  She is a cute character but she also has a hidden agenda against her own kind it would seem so though on the surface she is a ruthless vampire nobile, underneath she has much more depth than meets the eye.  The depth is somewhat obscured by the vague inuendos her alternate orders imply under the gaze of the high ranking vampires watching her every move.  Her would be collaborators, Mika and Ferid, ostensibly seem to be on board at least their interest if not their words or always their actions.  Ferid's motive is perhaps a bit more cloudy as he seems to be playing both sides but for some reason, he is keenly interested in the hidden plot Krul is working on.  Because of all these facts, it is hard to guess either her true motives or what truly drives her.  Whatever they are, they are not totally in line with either the Demon Army or the vampires.  One thing all three seem to share is a interest in Yurichiro.  It is vaguely implied that whatever both they and the underlying elements of the Demon Army are plotting involve his coorperation.  Yet despite all that, you get the impression that she is not ignorant of all the players hidden or on the surface.  In this sense, she seems to share some ungodly hidden talent like Ferid and Guren to sniff out what lies beneath the surface.  Her age maybe an issue to some but even if she stopped aging at 12 or so, she is far older than that in actual years and experience other wise she would not even be considered a royal noble of the vampire clans.

Overall, she ranks among the most appealing anime characters I ever encountered.  She is an entire package of cute, small, experience, maturity, wisdom, intelligence (though she seems to hide a it behind a mask and uses her misleading image to bolster that false image), charm, power, and mystery.  Inheirantly qualities that are often appealing to virtually all types of people are imbued in her character by mere presence.  I also can not help but wonder who the real antagonist is because despite her second in command's behavior, Ferid, does not seem to be the actual end all end enemy and may have done what he did as part of his own plan or one Krul was at least aware about.  Though, the results were probably unplanned.  After the screw up, he seems to be a bit more calm and is perhaps cautious of making further errors that might hinder both his and Krul's plans, whatever they maybe.  She has a great deal of depth even without much actual air time focus or attention.