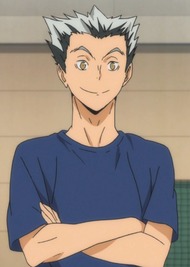 Bokuto san!!!!!!!you're too precious for my heart

Bokuto is always my golden boi and he'll never fail to make me smile when I rewatch Haikyuu!! Now if only the anime decided not to rob us of the beefy manga Bokuto we all know is far superior ;)

A hilarious drama queen who I wish had more screen time because every second he is on my TV is GOLDEN. He just has an amazing screen presence. One of my absolute favorite characters in this anime. I love his friendships with Keiji, Kuroo & Tsukki. So hilarious together. Also, his dubbed voice is SUPERIOR!