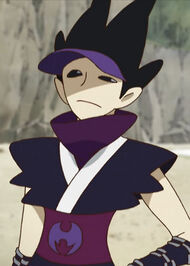 One of the heads of the Maniwa Ninja and a wielder of Kanna--a Deviant Blade of unrivaled toughness--Koumori is adept at both armed combat and subterfuge. He enjoys using his ability to shapeshift in battle to confuse and torment his opponents. As he makes heavy use of deception he has a particularly low opinion of the human race.