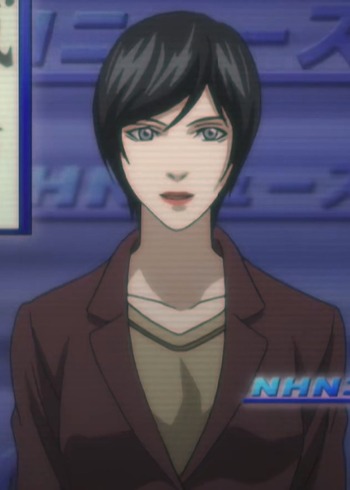 I LOATHE this bitch ><

I felt immense satisfaction when she died ><

She actually made Misa seem likable!

People can hate or dislike her all they want, but "reasons" such as "she comes between my ship" and "she killed Mello and Matt!" are immediate forfeits of credibility in my eyes.

First of all, she tried to form a romantic relationship with Light even though he already had a "girlfriend" (It was completely one-sided on Misa's part and Light was only using her for her demon eyes, but it technically still counts), which I have zero tolerance for. Takada clearly has no dignity or moral whatsoever. If a guy tells you he's going to dump his girlfriend, you wait until after he has dumped her. It's as simple as that.

Second of all, she was ridiculously easy to manipulate. Light just randomly calls her one day, confesses his "feelings" to her and bluntly admits that he's Kira. How could she not see how suspicious this was?

And lastly, she killed Mello.

She deserved worse than "only" being burned to death.

Takada was a dumb bitch.

I laughed when Light killed her.

She thought she was somebody when Light "chose her

Bitch, the Queen spot is already taken, you just the pawn.

I hate her because she tried to take Light away from Misa. >:(