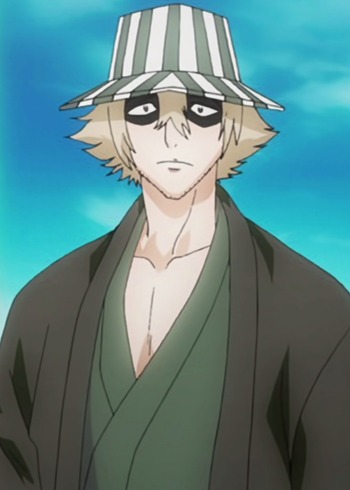 Urahara is the former captain of the twelfth squad however he was exiled from Soul Society, now he resides in Karakura town and runs his own shop. He is a mysterious man with a cheeky and playful side, but while it appears that he takes very little seriously, Urahara is an extremely powerful genius. His zanpakutou is named Benihime, which resides within his cane.

A humble helpful developer, that's the best way to describe this man, despite his genius he never gets arrogant and is always there to help the lost lambs when they don't know what to do, one of the few characters that I really look up to.

So he is the VA from Vlad in League of Legends O.o

This man is, without question, one of my least favorite anime characters -- of Bleach if not everywhere. It is difficult to explain, but I have always had a bad feeling about this man. Sort of like how Shinji Hirako felt about Sosuke Aizen, I feel like he is plotting something.

He is one of the best sage/teacher type characters along with Jugo Kannagi from Kaze No Stigma, and Yakumo from The Irregular at Magic High School.  All characters have a certain almost inhuman calmness in the face of any threat and a sage like presence with wisdom and insight soo keen as to give supercomputers a challenge.  They all also seem to know things going on as if they had spies everywhere and in greater detail than expected of them.  They are the libraries main characters go to for all things unknown and none of them disappoint.  For Kisuke, however, he seems to have been involved in alot of things and retains the memory no matter how much time passes.  Unlike the other two, he is more of a scientist and researcher himself so his knowledge often tends to reflect those sides of things more than the others.  He lacks the fatherly quality of Jugo and the childish quality of Yakumo, but make no mistake he is as capable of a mentor type character as the other two.  The only quirk maybe that his associate, Yuruichi maybe more of a sage than he is and it is implied she has more experience and lived longer so, his true status as a ultimate sage is a bit more challenged in his own show than others.  Yet it gives the impression that his wisdom and experience exceeds his actual years.