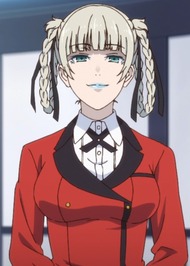 Love u and ur twin!

No, but like who low-key ships Kirari with Sayaka 🥵🤌✨

I love Kirari. My comment on Yumeko's page discusses some of the symbolism attached to Kirari's character such as how she symbolizes the Christian God (and I will add that Kirari is white while Yumeko is red, which are the colors associated with God and Satan) and potentially Yang in the Yin-Yang symbol. The traits attached to Yang are a desire for capitalistic authority, competition, and hierarchy, and a belief in a heaven and transcendent God. Meanwhile, Yin is associated with beliefs in free expression, social egalitarianism, and imminent divinity, which suit Yumeko's ideals.

It is interesting to me that Kirari sins, despite being God; she uses tarot cards, for instance, which is condemned by Deuteronomy. I think the writer is making a point - God is capable of sinning. This is true - multiple times, God states in the Bible that He is a jealous God, and envy is considered a sin in the Bible, therefore God sins. I am a Christian, and I love and worship God, but I can't deny this, and I like that Kakegurui is touching upon it through Kirari's character.

A scene that caught my attention was the one where she and Ririka agreed that they hate the -bami clan's way of doing things. They did not specify the reason, but Kirari said she understood Ririka's feelings because they are one in the same - and therefore share the feelings. In this way, some of Kirari's depth is hidden within Ririka.

I noticed the characters' eyes gleam at intense moments. For example, Meari's turn a brighter yellow. The colors they display all represent the Chinese elements. If you research the traits associated with the elements, you can see them in the characters - Kirari is metal.

She's hot but I prefer her sister.