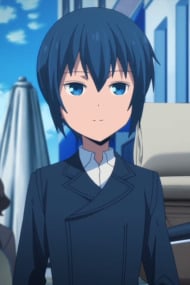 Yeah as others have around about said, Kino just exists. She's not a stereotype of anything. You almost never hear people call you by pronouns so it makes no sense. That and if you take offense to "misgendering" in the first place, it kind of proves you're not what you think you are. No girl is offended if they're called a boy, intentionally or mistakenly, for example, unless it's derogatory such as "sissy". Also just because you're fine with being called whatever (because it really doesn't mean anything) doesn't mean you're NB or LGBT. All that means is that you're comfortable with people calling you a cactus, a spaceship, a backpack etc. because again, whatever - what you say doesn't change facts and reality. Kino DOES NOT want to be labeled... that's kind of the whole point. And just because someone "doesn't care" does not mean you fix a label onto them that's just untrue. NB in the west basically means someone who follows both/neither stereotype... which just means you're a human, shocking, I know. But this isn't the west IRL. Kino doesn't care to pay any attention to all of this nonsense lol.

If she never met the other Kino, it probably would've been an entirely different life altogether. All of this, hence the name, is just out of admiration.

Idc what Kino is but they're girlboss

I came here thinking I would finally find out this characters gender... clearly wrong. Doesn't bother me too much tho, i love androgynous characters

How tragic, one of the best characters out there sabotaged and held captive by LBGITEROYI++4600409+ nonsense and drivel.

The Fandom wiki page is dead set on her being a girl. It's backed up by the light novels apparently.