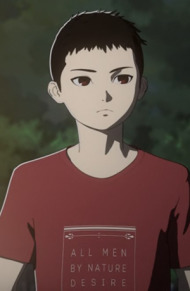 Ahh, how can I say it? I think simply saying he's as annoying as Shirou from Fate series is enough. They both don't deserve in the Seinen-anime stage (For men only). If I'm a 7 or 9 old boy only then I probably would like him.

BTW I just skipped watching almost the entire part where the MC showed up. That's how annoying he is.

I'm really enjoying his character! It feels so refreshing to have a male lead that has no interest in being a hero or saving everyone! The emotionless  selfish jerk do not get explored enough in anime in my opinion. More characters like him please!

If ajin story was real

Kei NAGAI will be our only hope against Sato

He's a selfish asshole BUT HE ALWAYS COMES THRU

I like him because he is a jerk. I dare to say that he is pretty complex and realist. He is selfish, wants to save his own ass, cares only about himself, and you know that? I don't find that unlikeable. He is also sly af and NOT a coward.