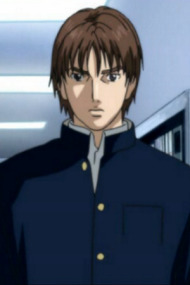 Kei Kurono is a selfish teenager who is constantly thinking of two things: sex, and how much his peers irritate him. After helping his childhood friend Masaru try to save a bum who fell on the train tracks, Kei finds himself with newfound power and responsibility that he doesn’t want, much to his dismay.

100% what matrixen said, I was always against feminism and the fake "rape culture" propaganda but this is 100% an exception. Kei kurono is a RAPIST and if you say otherwise, the police need to look into you. This is not a matter of opinion, this is a fact. He doesn't ask how a woman feels or what she thinks. Okay, maybe he's just a dumb teenager, maybe he's just horny... but that's NEVER an excuse to grab a woman's breasts. TWICE. When you know 100% she has no romantic interest in you... I mean why would she, if you act like a RAPIST?

The most toxic thing here is that it normalizes this rape fantasy. Teenage boys look at this and fantasize about a random stranger woman with a cute face, thin waist and big tits randomly proposing to move into their home and then they get to have sex with her. By force. Really toxic mentality that makes them grow up to be men who don't care about how a woman feels, what she thinks or likes, who she is, and only care about their own dick. And you know this anime COULD have been good, you COULD have worked really well with this shitty guy, you know, turning him from a horny inexperienced kid to a man who grows up, evolves, learns... but nope. And it REALLY doesn't help at all that the woman acts like the biggest, dumbest screaming baby on the planet. She has no personality, no brain, nothing, she's a walking pair of tits. And that's how boys look and think of women. "women are dumb". No, the creator of this manga is dumb, and the anime maker for not changing this. This anime is just plain sexist against women. And this comes from an anti-feminist. That's how bad this is. And to top this all off, this isn't even the only anime where I have seen this shit. Really, it's no wonder that weeabo neckbeards are such manchildren. So cringy, dumb, sexist with high standards and mistreat women. It's because of anime like this. What a shame.

they forgot to add the rapist tag, in ep 6 he thought of forcing himself on the girl, yet he has 1k+ likes

this society is beyond hopeless

what a disgusting insufferable bitch

he is such an asshole to a degree that he becomes a bad person, ruins the manga for me