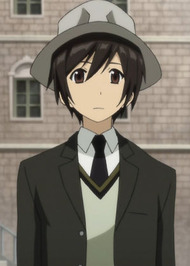 Yes he's weak and a bit of a coward, but he's got a good heart, & not throwing tables at people.

My guy Kujo does not need this much hate. He's not even that bad

I kind of hate generic characters to be honest. The kinds of characters that I REALLY REALLY hate though are characters like him who just thinks they have to defend everybody and that stuff. No, I'm not saying I like the characters who just run to the main character for help every single time either. I'm just saying, characters like Kazuya, Hiyori (Noragami) and Atsushi (Bungo Stray Dogs [I didn't have the motivation to watch till the end of bungo stray dogs because of him]), THEY PISS ME OFF. They seem too narcissistic to me. Because like I said, they think they have to defend everyone (because as they say, "[insert love interest or random character name] is just a normal girl/boy.), that they own just anyone (even if that person is just a friend) and that their superior to everyone, or might I say they think they're "heroes" because yeah, they defended everyone. For Kazuya, when he was like defending Victorique while thinking "Victorique is just a normal girl." LIKE DUDE SHE'S LITERALLY WAY SMARTER THAN YOU IS THAT REALLY NORMAL TO YOU? If you think I'm hating on Victorique too, actually I wanted her to be the main character. (I really think that Kazuya's kinda useless) Also, when the guy in the story (like Kazuya and Atsushi) always just HAS to defend the love interest (most of the time a girl), it kind of makes females look weak and that they can't just fight by thereselves. If you think I'm looking down on males right now, no. I am not. Actually I'm just very annoyed with some people that are male/female that just think they're superior because of their gender. Speaking of gender, I kinda hate girl tsunderes (the ones who hurt the mc okay. I actually liked Haruhi ya know) because well, when the guy FINALLY fights back they just use some random fact about they're gender. Like, "hEy YOu cAnT HiT mE i'm A wOMaN yOu KnoW" it's just....SO FUDGING ANNOYING.

I hate his voice and speech so much. Too bad the rest of the plot is just interesting enough to make me watch Gosick till the end. If I had dropped the show it would have been only because of this bland and useless MC.