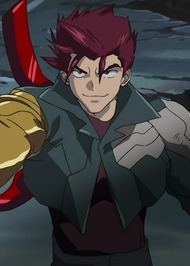 Kazuma is a picaresque Native Alter User who grew up and lives in the Lost Ground. Contrary to his gentle sister Kaname’s persona of him, he is quick-tempered and takes on shady jobs akin to his destructive mindset in order to make a borderline living for the two of them. His Alter is primarily the Shocking Bullet; limited to three uses, it engulfs his right arm, turning it into a kinetically charged power that razes anything it punches. Kazuma’s forceful ego and potent attitude ensure his place as an enemy of the HOLY force and a resolute rival of Ryuho.