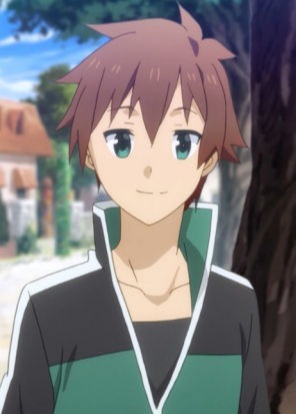 Basically the funniest protagonist in an anime

It's hard to hate him. Can someone rename him to chadzuma???

He a great characters, and just the chadesr isekai protagonist out there.

Look, KonoSuba is funny—no, it's hilarious. Also, KonoSuba probably wouldn't work as well if it had anyone other than Kazuma Satou as its protagonist. But, am I the only one who thinks this guy is just super annoying? I can understand why he's fed up with everything, I would be too, but he's always just so unnecessarily harsh to his friends, even if it's just for jokes. He always seems so ungrateful for them at least trying to help him out, even if it doesn't amount to much in the long run. They're trying more often than not to give a lot of effort for the guy for seemingly little in return. The other thing is just his ego, since he tries to make himself seem more important than he really is. I mean defeating like what four of the king's generals is no easy task and I understand that, but he never did it on his own, he didn't have an easy time with any of them, and it felt like he really let all the things he only helped to accomplish get to his head. He's also one insanely horny mfer honestly taking advantage of the girls around him sometimes so it's kinda weirdchamp.