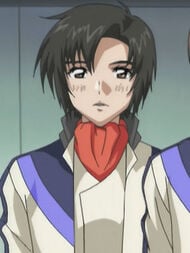 Kazuki is one of the children of the Alvis Project, and the most skilled pilot of Tatsumiya Island. He keeps a good relationships with other pilots and children on the island by remaining a quiet but sociable boy. His father is Commander Makabe, and his mother is Akane Makabe, both of whom died in the war in Japan. He piloted both Fafner Mark XI and Fafner Mark Sein.

i agree. kazuki is nice and nice as an mc, but he can be a halfwit sometimes. (￣v￣")

It is hard to like a character so badly written and developed.  He acts like the bravest one around and later the wimpiest one for no apparent reason.  His emotions are the most forced and fake of all the characters in an anime filled with cheesy drama.  Everytime I mentally try to connect with him during the series as a character he does something stupid, wimpy, or cheesy to throw me back away.  His fake crocadile tears at the end of one fight were annoying enough to make scratching a chalk board seem like a relief.