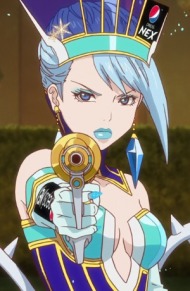 ice lady has good taste in the fellas

I like her, she has spunk and even when she's unsure what she wants to do she pulls through. A few times she's the one who pulls the others through to a more positive way of thinking. And she has EXCELLENT taste in men (though she can never have him) :D

Love her. She's so melancholic but always manages to fight with an attitude. And if nothing else, for the D cup breasts.

I only saw 4 episodes so far, and I really like her, I heard she later gets a crush on Kotetsu, so she has somewhat good taste (somewhat since he's much older than her). Also she's hot, makes me want to get a pepsi, and i hope she makes good use of that Ice powers of hers later on.