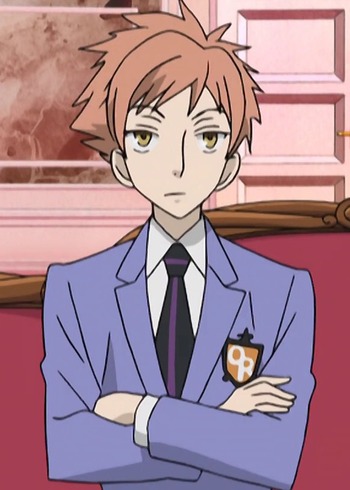 Kaoru Hitachiin is one half of the Hitachiin twins, heirs to a massive fortune in the fashion industry. Playful and mischievous Kaoru, like his brother Hikaru, likes to remain isolated from most of society, but has found a home in the Host Club under the whimsical rule of Tamaki. As people frequently have trouble telling the twins apart, the two have taken to playing a game wherein they force people to guess which is which.

Kaoru is so cute <3 People love him because he's the more mature brother, or hate him because being mature doesn't mean he's better than his twin, but no one is claiming those things about him when we comment on his personality.

And what a lovely personality he has!

He's more mature and truly smart, and yet he doesn't mind being silly for the sake of his twin. He'd do anything for Hikaru, which is why the girls at the Host Club and myself included love him so much! Yes, Hikary cares for his brother as well, but I find him a bit selfish, while Kaoru is one of those people that can give a lot of themselves to make others happy while still not losing themselves or who they are as individuals.

I'd like to see Kaoru having a bit more of character development, though. His brother has that aura of a child still finding their place in the world, so compared to him Kaoru seems like a "perfect" or complete character, and he got a bit lost to the background. I'd love to see him being the main character for once.

I CANT STOP LOOKING DIRECTLY AT IT