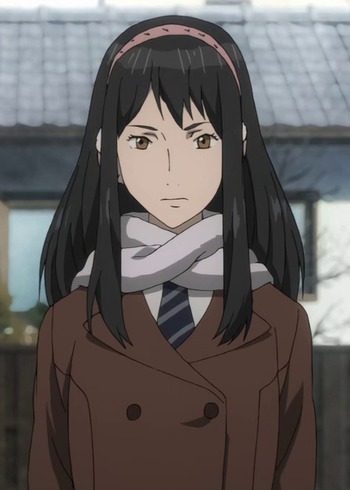 This girl was dragging the show down with her ridiculous antics. Her death was her own fault- she didn't listen and she was so self-absorbed/convinced that she had a soulmate that she got herself killed. There's nothing admirable in stalking and trying to steal another woman's man. It's downright shameful behavior.

No one 'deserves' another person.

Shinichi made his choice regarding which girl he loved. Kana didn't stand a chance.

There's absolutely no evidence that Kana "loved" Shinichi. She barely even knew him. It was an obsession she and she alone had because she was completely taken with the romantic notion that she had a magical connection to her soulmate. So she was not only shameless, she was delusional as well. Plus, downright idiotic for ignoring the evidence that was staring her right in her face. Sure, Shinichi never got around to showing her proof, but she had her sixth sense and Shinichi wasn't the only individual who set it off when she was around them- that should have been enough for her to pull her head from the sand and think maybe there was something else going on, but she was so set on the idea of her and Shinichi being meant for each other that she refused to act with any amount of common sense. And yet people seem to expect Murano to have magically known that something was going on with Shinichi when he refused to tell her anything.

She also didn't even impact the show that much, despite having her 'powers,' beyond giving Shinichi more trauma that he didn't even need from a storytelling perspective since he had already lost his mother to the parasites. She didn't even 'ground' him- Murano did that.

She was altogether a total waste of space and screentime.

<div id="content" class="style-scope ytd-expander">The saddest part about it is kana was the one who deserved shinichi, not murano. No hate it's just that she actually loved him, meanwhile murano was on her own time.</div>

This girl was way better than Murano. I cant believe that she died, But if Murano had died, no one would care about it. Once this girl died, the show became much sadder. She did not deserve to die!

Glad this delusional bitch met the end she did. Good riddance.

This girl really needed to get a life. She didn't deserve to die, but... man, was I glad she did. Wouldn't have been able to put up with her for the whole show.

Like, geez, if you know the guy is taken already, leave him the hell alone, it really isn't that hard.