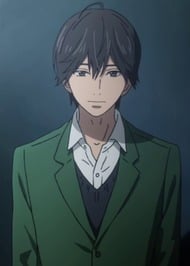 My precious baby- I can't even imagine the amount of pain he must have been in.

He just personally resonates with me way too much and I was fighting tears the whole way through.

I think people are too hard on him and Naho- his emotions are literally killing him from the inside. He's dying inside. I think some people might not understand how painful it is to keep existing sometimes- so much so that you would take your own life. I just want his suffering to end and for him to find his self-worth.

idk man, I wouldn't judge him too harshly, he treats his friends badly but that's because he feel like he doesn't deserve friends. After all, he feels responsible for his mom's death and it so happens to be the day he first went out with friends. He probably took it as a sign that he was just meant to be alone. I'm not excusing his attitude but everything isn't black and white. I actually don't mind him and Naho together, I just believe he needs more time to grow as a person and accepting his past before getting into a relationship with Naho.

I felt annoyed by his attitude, but I regretted it way to much. He's just a broken person, I want to hug him so bad ):

he was such a relatable character. i can see why people find him annoying because of his attitude sometimes, but honestly i think he was just to emotionally hurt to think of anything else properly.