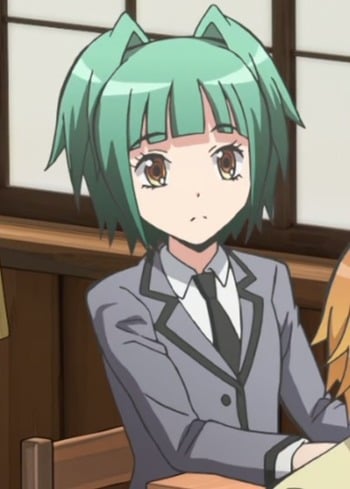 I hated her since the beginning.

I LOL'd at the comment criticisizing her true nature and connection to Korosensei's past coming out of left field and being a total surprise after she spend so much time being a side character. That was the flipping point. That's what makes her such a dangerous assassin - she knew exactly how to blend in to the background or on the side and play the long game until she was ready to bury the knife in her target's back at just the right moment. The best assassination attempts come from those you least suspect of possessing that drive and level of skill.

I do honestly love this character, the idea and potential of the fact she is the sister of the old teacher is endless.  She is a very caring, kind and bubbly girl who I really love.  Her character is overall amazing and she is the best girl in Assasination Classroom in my opinion.  The only flaw was the big reveal was too sudden, forced and just rushed, therefore didn't have as much impact as it was poorly executed. It was like she suddenly decided to reveal her identity when it was literally like any other day.  I wanted her to be "rogue" (as i put it anyway) to last at least a few more episodes, where she becomes the antoganist almost until Nagisa kisses her, deluvers a killer speech and she eventually comes back to normal.  I do still love her though

And I'd like to add on, that there was no pay off after her big reveal as the actress, she just kind of "returned" to her original personality, which is not only confusing but a bit irritating. In a sense, despite having the biggest development, she had the least amount of character development. It was like nothing about her changed, after being a semi-homewrecker.

To be honest, I don't like her. (This is my personal opinion.) I didn't dislike her in the beginning when she was just this quirky, fun, comic relief kind-of character, who was cute and didn't play much of a role in the series. However, she "suddenly" reveals herself as this actress, who happens to be the sister of the lover of Koro Sensei. It was just so random and forced, and in my opinion, spoiled some of the series potential. There was no foreshadowing, no hints, no nothing, it felt last minute in a sense. All the other characters received steady character development but hers was just so out of the blue.

Now don't get me wrong, this is one if not my favorite animes of all time, and I think characters like Nagisa, Karma, and Koro Sensei were brilliantly written, but they could've taken a different, less random approach at making Kayano more relevant to the plot. Once again this is just my personal opinion.