Aka: Juvia of the Great Sea 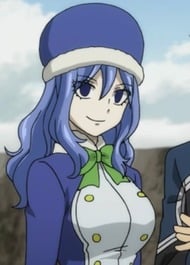 I don't know, looking back her character when first introduced was gloomy, downtrodden and perfectly matched her powers. After she joined Fairy Tail, they basically made her love for Gray her only character trait. I mean, it's one thing that she likes Gray and if it plays a huge role in her personality then fine, but for it to be pretty much the only personality trait she has? Come on. That's just ridiculous.