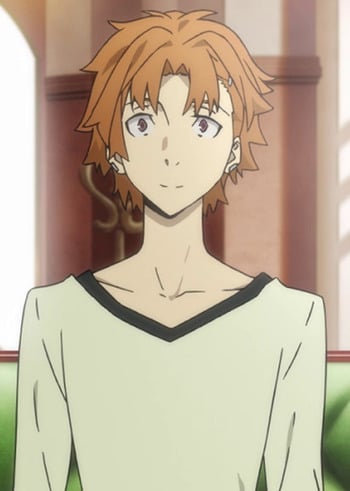 his ability is lowkey god tier

Does he like doing shit with his sister? That's enough to put me off

Plus, you cannot deny that you wouldn't do the same for a love one if they are in harms way

I do personally think he is a great character.  He isn't at all selfish (exclduding when his sister is involves, which I will get into soon) and is a great addition to ADA, he is courageous - not everyone is willing to sacrafice everything as he does since the port mafia does know that he has his precious sister, therfore him doing anything brave is actually quite dangerous as I am sure he acknowledges.  Anyways, ready to kill anyone who hurts a loved one is only natural, he is noramlly a calm headed and down to earth character but its sort of like the train riddle:

Train with 100 people is going to run over a car with 2 people, you can pull a lever to save the two people but the train will crash, obviously you won't pull the lever since 100 lives outweigh two.  But then what if the two was your parents?  Logically the choice should be the same but due to the emotional attachment we have, we will most likely choose to pull the lever as the train peolpe are just strangers to us though we would know that it would be logically incorrect.  His mindset is sort of, not exatcly, like that.  He is willing to do anything when it comes to his sister though he may know it could be morally wrong so therefore I cannot hate him when he abandons his moral compass as he tries to save his sister.  Because his sister (two people) outweigh the safety of himself, moral and ethicity (the 100 people on the train).

Do you sort of get what I am trying to say through the jumble of words and examples??