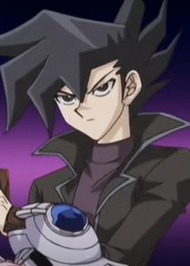 I love how no one mentions how he's the only one in the entire school wherein black. Like he's just THAT edgy that they all just give him a pass. Lol

The most funny character in the card game for children franchise.

In the anime, Chazz (Jun) is more of a joke than a serious rival.

He's supposed to be Jaden's (Judai's) rival, yet he has never won a single duel against Jaden, became a fanboy for Alexis (Asuka) and don't even get me started on the Ojama costume.

To be honest, I would've prefered if Zane (Ryo) or Aster (Edo) replaced him as Jaden's rival since they've both defeated Jaden at least once and are tougher opponents in general.

Chazz is way better in the manga though. His manga counterpart is exactly what I wanted his anime self to be like.