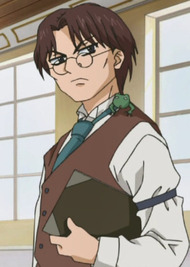 I was going to leave my comment at 'abusive asshole', but I think one of the most frustrating aspects of the anime (haven't read the manga yet), is that the students are handed down genuine abuse and mistreatment. Jinno is one of the 'good guys' because the story says he is, but nothing actually makes him good. He is consistently willing to abuse children because he's worried they'll grow up to hate the school system - which they SHOULD hate because it is corrupt. He is angry at them for hating mistreatment.

Now, none of this would bother me if the story didn't always state that he's a 'good guy'. There's a certain moral dissonance present in how the children are treated in the story and what the story says they should be willing to put up with. Mr. Narumi at least presents an interesting quandary - how do you change a corrupt system from within?

Jinno electrocutes kids for talking back to him but he's a Good Guy.

Now, the manga could reveal surprising layers. So I'll see.