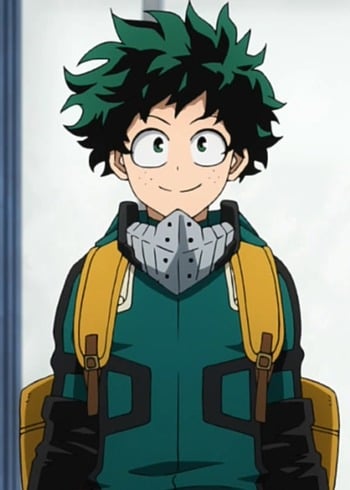 He had a lot of potential in the beginning to be a likable character. It was interesting to see how he'd pave his way through being quirkless and all. But then, he ran into luck. Well that was disappointing. He didn't even do anything like training and those notes he's taking? Yeah like that would help. Even a "side character" from Naruto did better. Nevertheless, I guess it was fun watching how he never lose when he's supposed to due to plot armor lol

Well, he's not a bad character. Just got some holes here and there. He's supposed to be knowledgable about quirks and powers but he's acting as if the "kicking revelation" was some kind of spiritual awakening. It didn't helped when Mirio was introduced. He was all Deku was supposed to be like and still the one who deserves One for All imo

He's entertaining and adorable that's for sure. The kind you want to protect at all costs. I genuinely want to like him so I guess I'll prolong my patience a little more and see if he'll change.

He's one of those shounen MC's some people hate lol.

I'm neutral about him. He's an okay character but sometimes get on my nerves.

its my love and hate relationship with him for me😔