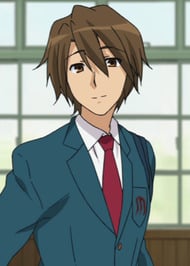 Itsuki Koizumi is a charismatic high schooler who always has a smile on his face. Whilst he always speaks and conducts himself in a polite, proper manner he is quick to challenge Kyon's views. Itsuki always approves of Haruhi's often outrageous schemes, and his speculative nature lead to logical explainations for the inexplicable situations the SOS Brigade often find themselves faced with.

Can understand that for someone is annoying to see him always smiling and being optimistic, but he's also there for Kyon to avoid...some really big trouble.

I think his character role got mixed up somehow with Nagato's as he is more of a hands off observer than she is.  His so called power is pretty much a non factor cause it is only useful essentially in a dream like world.  How does that qualify as an esper?  It may have been better to be clear on what so called espers were in this anime earlier on and in more detail or just call it something else cause he does not seem to have esp or any mental powers whatsoever and even in the other worlds he can use them they seem pretty limited.  He actually uses his best powers even less often than Yuu from Seraph of the End (Who himself hardly ever uses them).  He seems like an ok guy on the surface as it were but his non chalant attitude, sense of total detachment, and main factor in harming Haruhi is not ok.  A guy who purposefully tries to screw up someone's mind and personal character growth like him is not worth much.

A desperately needed breathe of fresh air in this series. Often times he seems to be the only one with the inclination to actually think about the nonsense that happens around him. The only character I actually liked in this show.