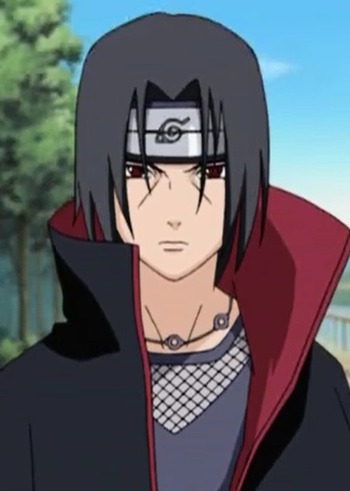 Itachi is a former Konoha ninja and elder brother of Sasuke, but now he works for Akatsuki. Before leaving Konoha, Itachi was thought of as a genius of his generation and was one of the youngest members of ANBU, but went missing after commiting an atrocious crime. He is proficient in all forms of ninja arts having mastered all of the Uchiha clan techniques. He also possesses the Sharingan and his ability to wield its power far exceeds that of Kakashi.

One of my most hated characters ever. The 'twist' was so stupid. He killed his family, tortured his brother, none of that is okay and the whole twist making it so he was in the right was even worse.

love him sm and he's so hot

The character I hate the most from the series. I actually liked Itachi because he was a cool and ruthless villain... then they threw it all down the drain with their bullshit "he was a good guy all along" nonsense. That's when Naruto as a series died for me. From that point onwards, so many characters couldn't stop sucking this guy off, this includes, Hashirama, Hiruzen, Naruto and heck even Sasuke himself who began to worship the guy that single handedly ruined his life.

Itachi is arguably the worst brother in fiction and has a horrible genocide excusing fanbase (no surprises there).

I have mixed feelings about him. On the one hand, he's fascinating and I really want to like him. On the other hand, I'm deeply uncomfortable with the fact that murdering his entire clan and torturing his little brother who was only seven is supposed to be the "right" decision.