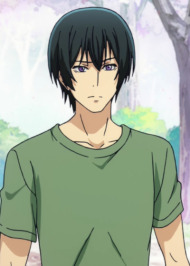 One of my favorite MCs

Is he the Son of sakata Gintoki?

this isnt shown much in the anime but this guy really is a great fucking person i dont mean he is the best mc i have seen but he cares about his friends a lot, whenever people talk shit about his friends he instantly speaks up he doesnt care if people think ill of him later and is just a great guy i general and it sometimes pisses me off people in his college talk shit about him saying he a creep wierdo and a bad person when ik its for the sake of the manga but still pisses me off