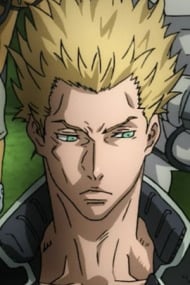 Surprisingly this guy isnt as bad as many people might think, he loves battle and does not respect his enemies yeah but hes not a psycho to his allies. When children soldiers came, he told them the truth  that they are expendable, but would have a drink with them if they live. Yeah his excitement for being in war pretty much fueled his downfall by getting Daryl to hate his guts, he loves the mobile suits where he feels free, and the fact hes not afraid of doing things unethical to his enemies but thats war sadly anything goes.