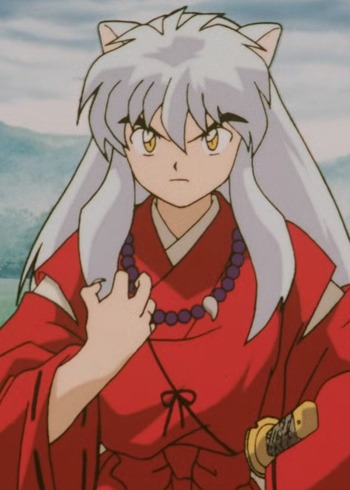 Thanks to being sealed for half a century, the half-demon Inuyasha barely contains his rage and frustration behind his normally indifferent attitude. His fervent goal is to collect all of the Shikon Jewel shards using the restored gem to become a full demon like his half-brother rival, Sesshomaru. Although he would rather obtain these shards alone, Inuyasha reluctantly travels with companions who can assist him, such as Kagome and Shippo who prove more than capable of providing assistance when he needs it. From acquiring one of his father's swords, Tetsusaiga, the sword of destruction becomes the prevailing alternative to his lethal claws. Though his claw's signature "Iron Reverse Soul Stealer" is no move to scoff at, he's at his most powerful in battle when wielding the massive sword of destruction Tetsusaiga.

it's so funny how inuyasha always talks to kagome, like a real bitch xD

I, personally, don't like InuYasha. I think he is a bit too indecisive. If he would just pick between the two damn girls, there wouldn't be so much hate.

InuYasha is one of the first Anime's I've ever watched, so it makes sense that I still watch it even today. My will to draw cartoons also stemmed from Rumiko Takahashi's work. Over the time I've known and seen InuYasha's character throughout the years, I just started to dislike him all the more. At first, I thought he was okay. But then ... he started to get irritating. I don't know, it's probably just me.

I like both Kagome and Kikyo, so I just don't like how they have to fight over some guy that doesn't even know who he loves/likes? I like how in the manga, eventually they'd stopped hating each other so much. So that was good.

Then again I could be....KikyoxKagome ALL THE WAY. Ehehe...that would kind of bring narcacissm to a whole new level. Wouldn't it? XD Oh god, that's hilarious.