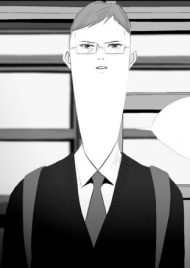 I feel bad for him, he annoys the heck out of me, but he's most likely that way because of the way he's raised. He believes he lives freely with a bright beautiful future ahead of him, but he's really only given the path his parents have set up for him. Again I think he's annoying, but I think he's just too overhated just because of his head (even though it's kind of symbolic). And as pathetic as it is I only liked him just because of the fact I think he's overhated. :/ Oh well atleast he's an interesting character.

Edit: I didn't edit this lol. So if there are spelling errors feel free to correct me because I'll probably will never fix said errors, dipshit.

Edit 2: I still have not edited this god foresaken comment, but sorry for the last edit, you're not a

you're just more elegant and sophisticated piece of shit. O3O